In all honesty, though, Mount Everest is high enough. Especially when it comes to the board game. Even more so when you have to drag tourist and amateurs up its deadly heights. Mount Everest is a cruel euro-game with some light card play and a really interesting theme.

I’ll try to quickly explain how a game of Mount Everest works but bear with me as it is a little complicated. Each player controls two immortal guides. Players also have an identical deck of cards that represent how many spaces up (or down) the mountain they can travel on a given turn. At the start of each round players select 3 from a hand of 6 to play in the coming round. The player who chose the highest number of upwards movement cards is then forced to take one of the risk tokens currently on display-these will in some way negatively affect their turn, so it is generally bad to get these. This is a nice bit of theme coming through in mechanics as it represents a player being reckless and rushing up the mountain too quickly and the risks that entails. Generally, it costs a single movement point to enter each space but some of the spaces closer to the peak cost two movement points instead.

Players take it in turns to use their movement points so their guides can travel up the mountain. Why are these immortal guides putting up with thrill seekers and rich tourists and not ruling the world? The answer is they are addicted to victory points; a cursed affliction currently sweeping the globe. If you suspect someone close to you is addicted to victory points, please consult your GP. It is a guide’s job to take tourists and amateur climbers to the very top of Everest and then safely back down to base camp. Each time one of these climbers gets to the top of the mountain a player gets points and the same is true when they have returned to the bottom. If any point someone dies, then players are punished for their failings through severe minus points. Needless to say, dead climbers are a bad thing. As in real life, death is a very real possibility in Mount Everest. 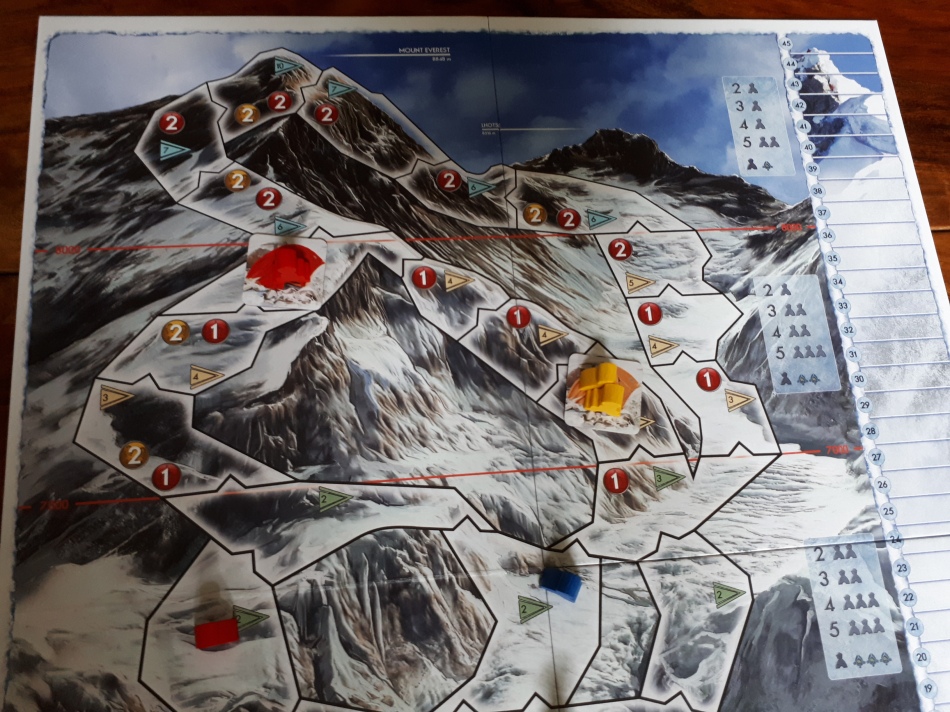 Guides like normal people, can only either carry an oxygen tank or a person (they only have so many hands). What guides can bring up the mountain is represented on two individual player boards. Each one can be in charge of carrying a tent, oxygen tanks, amateur climbers or rich tourists. Each of these takes up a slot on the specific guides player board meaning players must decide how many people (which are worth points) to drag up the white giant, versus the amount of oxygen they’ll need to keep them alive. Already this provides an interesting choice. You can choose to have an equipment pack horse guide (the one who carries all the bits and bobs you need to stay alive) and a babysitter guide or split things evenly. This does present an issue for new players as they won’t have an idea what is important or how to distribute items. So be sure to remind them how important oxygen and tents are. 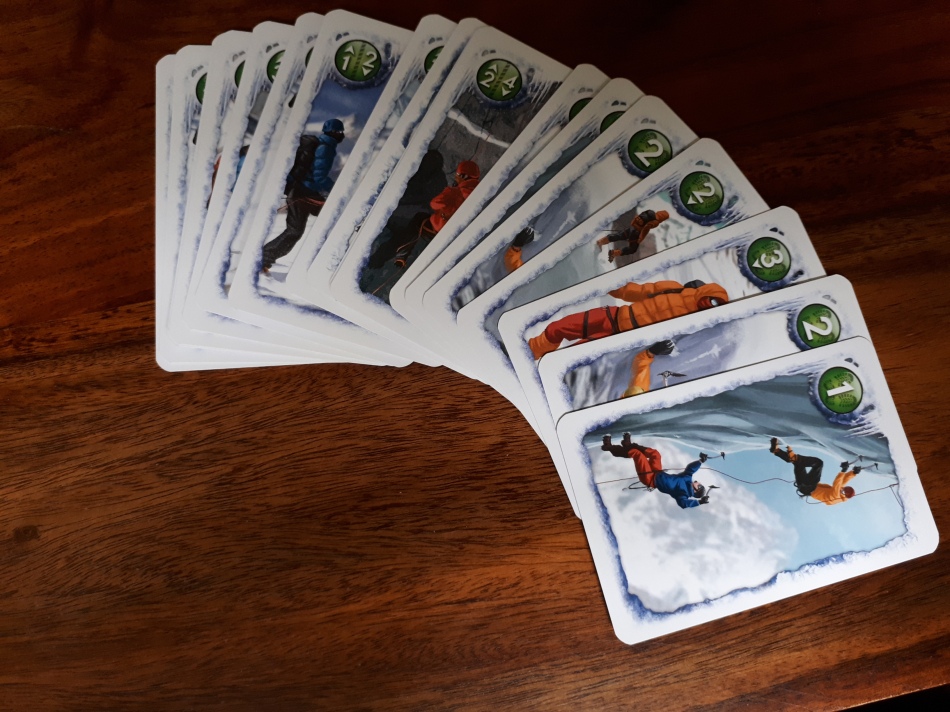 Tents can be placed on any space on the mountain, provided that a player pays a number of movement points equal to the amount it would cost to enter that space. If a guide with climbers is in a tent then at the end of the round they each move up one space on the acclimatisation track. Players who have a guide with oxygen tanks inside a tent can also play those tokens before picking their 3 cards at the start of a round. In doing so, they get to draw from their acclimatisation deck and put one card in their hand and the rest back on the top or bottom of their acclimatisation deck. These cards are then used to increase a climbers oxygen levels and can be played instead of a movement card. This is one of the main ways to stop climbers dying. It is also horribly confusing and the only way of increasing oxygen outside early mountain spaces and your tent.

Finally, we have weather. Players have a 3-day weather forecast and the game is played across 18 days. Each turn has a specific weather condition that will affect different altitudes of Everest. The day’s weather will massively affect how you play each turn. If there is a snow storm on the peak of Mount Everest causing acclimatisation issues, then you might want to just sit in your tent for another day. If it is nice and sunny then making a mad dash for the summit could be a good plan. Each day a new weather token is revealed, so players can always plan up to 2 turns into the future – except in the final few turns obviously.

Mount Everest is certainly an interesting game with a theme not often explored. However, you’d be hard pressed to get me to ever play it again. While I love the idea of battling the elements and trying to endure this horrible conditions without anyone dying, the game does a lot more wrong than I can possibly forgive.

Randomness is a significant factor in Mount Everest that often makes planning pointless. You might make it all the way to the summit only to draw terrible cards the turn after and have everyone turned into an icicle. On the other hand, one of your opponents might consistently get great draws and win just because they were lucky. I know the luck element compliments the theme of surviving in Mount Everest. This is mitigated by only picking 3 cards from a hand of 6, but it still makes planning turns ahead pointless as you have no idea whether you will be able to execute your plan. For example, on one turn I made nearly the peak of Everest and placed my tent down to hide from the incoming snow storm. I then had to wait for 2 turns in order to draw enough down cards to make it far enough down the mountain, so that my people didn’t die. Two whole turns in which one of my guides couldn’t move anywhere and the other ran down the mountain for supplies. In a game that only lasts 18 turns, I spent more than 10% of it doing basically nothing. This wasn’t an isolated case. It happened to other people in every single game of Mount Everest I played. It was never just down to poor planning. There is no way of know what cards are going to turn up next.

The idea of bringing climbers up Everest is a great idea, but it isn’t all that fun in practice. Trying to keep these idiots alive is incredibly boring. If they die, then you get a massive penalty which is a pain. I know people dying should be a bad thing but if they die because of bad card draw that just feels like you’ve been robbed of agency. I never felt like they died because I miscalculated or I hadn’t considered something other than the possibility I might draw terrible cards. The game encourages pushing your luck as you ascend the mountain which is all well and good but becomes a massive issue when you have consistent bad luck. Because of the luck involved in the card draws and weather, Mount Everest can sometimes turn into who can stay alive in a tent the longest rather than an epic race up the highest mountain the world. Honestly, I don’t feel the game does Mount Everest justice. It doesn’t capture its grandeur and scale of the mountain or the horror faced by its climbers. Instead, it reduces it to people cowering in tents hoping to draw a 3 rather than a 2.

Player interaction is also very limited in the Mount Everest board game. All there really is trying not to get risk tokens (which reduce movement or acclimatisation) and depending on the player count, only a specific number of guides can be on a space at a given time. The game is more player versus mountain, which may be nice and thematic but doesn’t make you feel like you’ve had a fun evening with your friends. There is an alternate game mode if you have the game K2 where it is played as a pure race game. I don’t own that game, so I can’t speak to how that plays but it imagine it is more intense and generally more fun than what Mount Everest ended up being.

Mount Everest’s rules are far more complicated than necessary – did you notice how long it took me to explain them? The game could have been simpler and it would have made it a lot more fun. There is some flexibility in how you can play such as the board being double sided and having two types of weather to tackle. They don’t help to address the game’s core issues, so are you ever going to use them?

Finally, while I can’t recommend Mount Everest I also can’t help but wonder what I’d spend my time doing if I was an immortal guide. If you were an immortal guide, what would you spend your life doing? I’m curious to find out.

Made myself a dice box and tray.
These three metal uruk hai scouts are the last of my Isengard army for the moment. I want to add some more scouts in the future but for now a new project awaits.
Some snaps of towards the end of an Isengard vs Dunharrow game. It was really close.
Uruk Hai pikes and a banner in readiness for a game this Friday. At some point I'll give atleast the banner the White Hand of Saruman, but for now they are done.
More Isengard. - Nevi
Some progress with my Isengard force.