You take your first steps into this strange world, unsure where you are or why. Charging forward you grab a weapon, it will probably come in useful. Surprised by your speed, you listen to the strange voice as it compels you to run forward. Humanoid enemies try to stop your journey, but you shoot them down or leap past, always continuing toward your destination. The floor begins to break apart, and you find yourself falling, but the voice comes to you again advising you to ‘glitch’. The world slows, and you jump on the air as if it was the ground until you land on a solid surface once more. Just like that, you are back on the path, the path to the exit of this strange world. 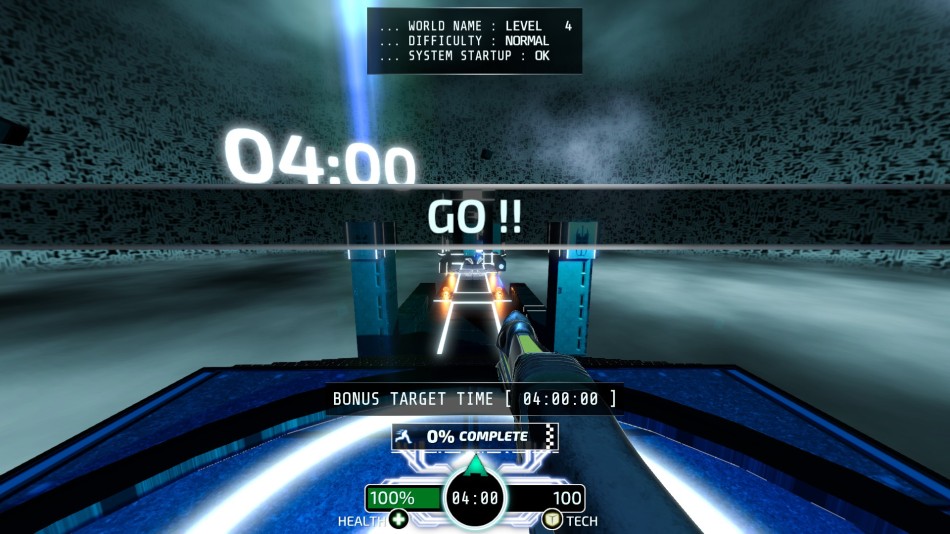 ICEBOX: Speedgunner is a fast-paced first-person shooter where the goal is to reach to end of the level as quickly as possible. Along the way, you’ll hit obstacles like enemies, falling platforms and other annoyances, but the goal remains the same – reach the exit.

Nothing else really matters in ICEBOX. You could spend time shooting people, but it is a distraction. You could explore, but it is irrelevant. You could take your time, but that isn’t the point. ICEBOX: Speedgunner is all about reaching a state of flow. Also, know as the zone (I like to call it being ‘one’), flow is a mental state people enter when they become fully immersed in what they are doing. When you are in this state, nothing else matters, nothing else exists, there is only the current experience. In this case that is reaching the exit in ICEBOX: Speedgunner.

Honestly, that is one the biggest compliments I could give a video game. The minimalist design and strange story go a long way to creating this compelling world where the only thing important is moving forward. The sheer speed with which you move through it is reminiscent of driving games like Burnout. This is something that you can’t often say about a first-person shooter. Additionally, as someone who doesn’t generally enjoy this genre and isn’t typically very good at them, it means a lot that I found ICEBOX so compelling. The shooting itself is excellent though and with the slow down from the ‘glitch mode,’ you feel extremely powerful in this world.

Which is really interesting as the character you embody is cleared trapped. There is a beautiful dichotomy between the power you feel during a slow down as you pop off headshots while being protected by a shield and the continued feeling of imprisonment. The voice acting and aesthetic design are excellent and really sell this strange ICEBOX world. Each mission slowly unfolds a story about what is happening and why. It isn’t a lot, but it was more than enough to keep me engaged and continue to the next level.

ICEBOX: Speedgunner also has a marathon mode which procedurally creates an endless level that goes up to 100km long – pretty darn far. Each campaign level has a leaderboard, encouraging you to beat your previous time. The game is incredibly generous with quick game modes such as Zen Mode which removes enemies and hub zones, and Hunted Mode where you must play weaponless. There are a total of 8 Quick Modes with a lot of ways to play.everyone will have their favourite, but they are all great additions. That isn’t everything ICEBOX has to offer though. There is even a New Game Plus when you finish the main campaign. This allows you start with all the weapons, gain unlimited jumps as well as dash ability.

Developers, Games of Eden, have created an incredibly generous game with so many different ways to play. They have managed to craft one of the most enjoyable and unique shooters that I have played in years. ICEBOX: Speedgunner is available now on Steam, and I cannot recommend it highly enough.

Made myself a dice box and tray.
These three metal uruk hai scouts are the last of my Isengard army for the moment. I want to add some more scouts in the future but for now a new project awaits.
Some snaps of towards the end of an Isengard vs Dunharrow game. It was really close.
Uruk Hai pikes and a banner in readiness for a game this Friday. At some point I'll give atleast the banner the White Hand of Saruman, but for now they are done.
More Isengard. - Nevi
Some progress with my Isengard force.