Forests need fire to stimulate growth. It clears space and releases nutrients into the soil. There are certain trees such as lodgepole and jack pine that need fire to reproduce. The flames open their cones and allow their seeds to grow. Fire is another part of the ecosystem, it brings good and bad, life and death.

In Sylvion, however, this is not the case. There is a fire entity called The Ravage that wants to burn down the entire forest and leave nothing but ash. It is your job to stop the fire spreading and save the forest from destruction. Throughout the game, you will seek the aid of forest creatures, put out flames and do your best to keep the fires of The Ravage at bay. 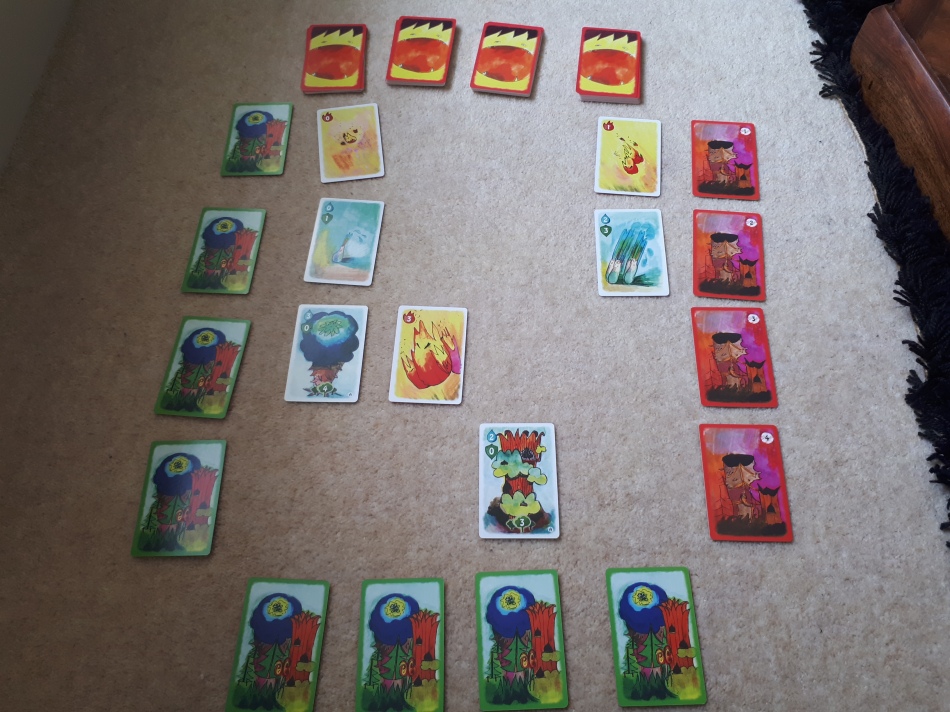 If you have ever played a tower defence video game, then how you do this will immediately make sense. While you can play Sylvion with a partner, it is best as a solo game. You are going to set up a grid of cards with 12 Edge cards on three sides and four Ravage stacks on the fourth. The Edge shows how much of the forest remains and The Ravage represents the fire and its elementals. Each turn you are going to reveal more fires and try to stop them from engulfing the forest.

You are going to place trees, use powerful fountains to douse the fire or seek the aid of the animals of the forest. To play any of these cards, you need to discard cards equal to their cost. Each card you play contributes to battling the fire and helping the forest flourish. Fountains allow you to stop the flames progressing to the end of the grid and causing damage to the heart of the forest. Each card has a cost. To play them you need to discard cards equal to that cost. This means weighing up whether to invest in a single expensive card or a few cheaper ones. Each type of card (trees, fountain, and animal) all help the forest differently.

Otherwise, you have lost. Depending on the difficulty of the game, you will start with different numbers of Edge cards on their Desolated side. Each turn, The Ravage will reveal the top card from each of their four decks. These might be new fire elementals or support cards. Fire elementals are placed in their ‘lanes’ move towards the Edge card in front of them. Support cards do a one-time ability that aids the fire and gives you another problem to deal with. Every single card is dangerous, and you can almost feel the heat from each elemental as it stalks towards the edge of the game grid. 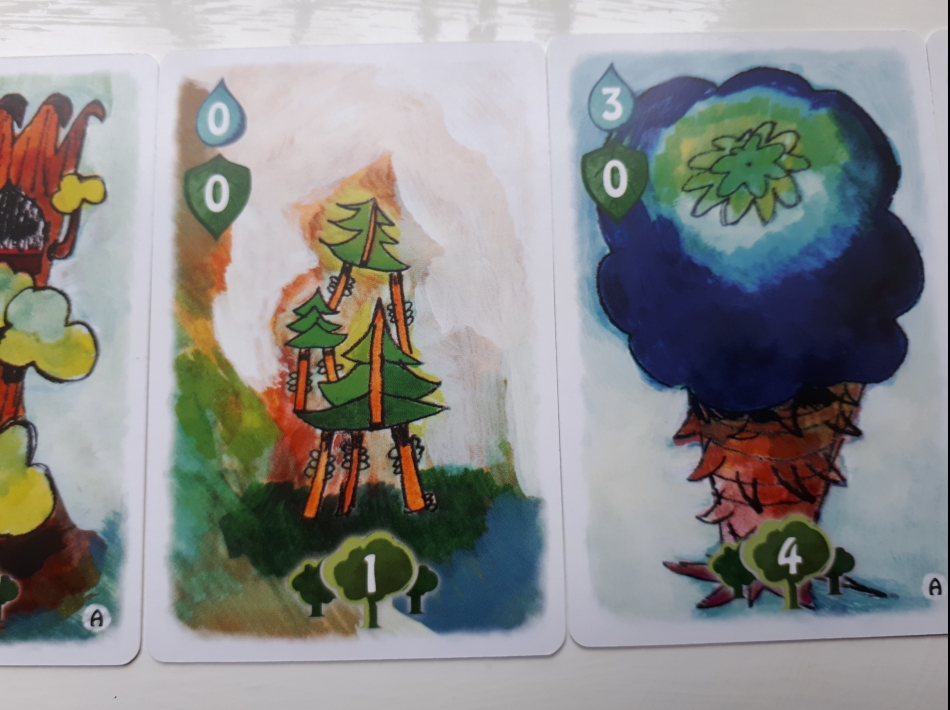 Sylvion is a fantastic puzzle and challenge. It is tense and gripping. No turn is ever stale, there is a constant threat from The Ravage decks. You never have enough cards to stop all fire every turn. You will need to make sacrifices. This might mean letting a few trees burn or letting some elementals through to the Edge cards, so you can stand a chance at winning. Sylvion is hard, really hard, and that is why it is so damn good.

Sylvion might have this adorable beautiful artwork, but the game itself is brutal. It isn’t a game about stopping a fire. It is a game about war. The war between the fire and the forest. The war between life and death. The will be casualties. You might not survive. There will be tough decisions and choices you don’t want to have to make.

The card play is wonderful. You need to discard valuable cards every turn. The choices that you made on your last turn will affect the game in two turns time, and the choice you make now will affect it further down the line. Sylvion allows you go in with a strategy of how you are going to block the fire, have that same strategy burnt to a cinder and force you to slowly build up another. It is wonderful and brutal. 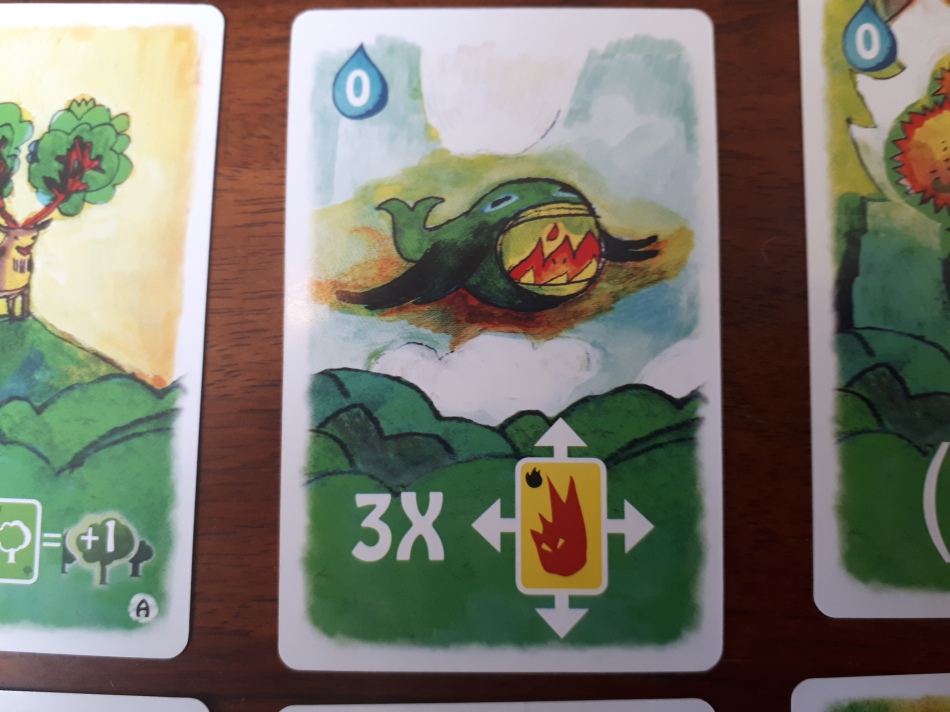 When you draw into a whale (because obviously, every forest needs a whale) you rejoice because it allows you to manipulate the elementals on the field. This can buy you a few precious turns, push an elemental into a fountain or bring you to victory. However, when you draw into a Simoon card (from The Ravage Deck) that hastens the growth of the fire, you will groan as your careful battle plan suddenly has a much shorter deadline. Every card in Sylvion has an impact and you feel its effects throughout the entire game. And that is without talking about the elementals with The Ravage symbol at the bottom.

These cards bring forth The Ravage which is a lovely little flame pawn. It looks suitably grumpy and irate for an all-powerful fire entity. When a card bearing its symbol enters the battlefield you immediately place the token on top. An elemental with the power of The Ravage on top of it will destroy a fountain that exceeds its strength, stop the card’s destruction, or cause you to lose the game instantly if it reaches the Edge. Each of these actions removes The Ravage token, but none of them are something you want to deal with, and yet you must. The Ravage token stokes the flames of an already intense game and causes it to become deadly. All your plans now need to shift and change to deal with this new, powerful threat.

While you don’t need to play with this token, you should because it is a wonderful addition. It is sensible to learn the game and understand how to play without it, and the game recommends exactly this. 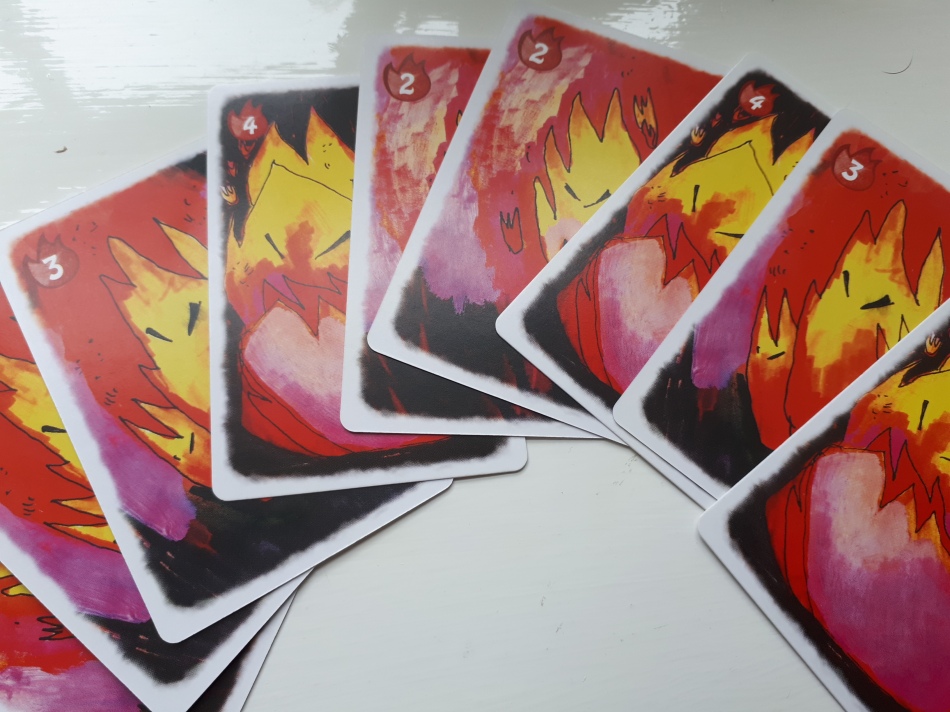 The puzzle in Sylvion continues to grow and evolve as you play. You feel the heat of the elementals as you struggle to prevent their progress. However, much like a fire the game can flicker and go out at times.

Firstly, it is just a bit too complex. There are a few too many things to remember. If you choose to play with the advanced rules, then there is a whole card drafting/deck making part which can take a while. While you don’t have to do it if you play with the advanced card your deck is too big. You could discard at random, but that feels like it removes too much agency from your game. Some of the cards are a bit too complex as well. This will have you checking the manual to confirm what ability an animal card has or what a Ravage support card does. This isn’t great but if you play Sylvion a lot, then you will gradually learn these.

Next, moving elementals down the grid towards their goal is not the best. Making the grid takes up far more space than you might expect. This means that if you don’t have quite enough space, then seeing where exactly an elemental is can be tricky. If there are lots of elementals in play, then you need to move them forwards a lot. Since this is primarily a solo game, then you are going to end up doing a fair amount of ‘board game admin’ each turn. This includes: revealing cards, moving cards, drawing cards, working out whether a card wins a battle, activating abilities, checking for Ravage symbols, and turning over Edge cards. Most of these happen of every single turn of the game. It ends up being too much and takes longer than the thinking process for what to do each turn.

Sylvion is gorgeous. From the pop book style box to the lovely artwork on each card, it looks amazing. The puzzle and challenge are equally brilliant and engaging. However, there is a bit too much complexity to the rules and the expansion that comes in the box only adds to this problem. You are going to spend a little longer than you’d like moving cards and checking things rather than getting down and playing the game. However, if you are looking for a decent solo game then Sylvion is definitely that. You will have different challenges each time you play and if the game starts to feel stale, then you can add in The Ravage token or play with the expansion. Sylvion, like a flame, is beautiful and entrancing.

If you want to get yourself a copy of Sylvion and support the site, then please use our Amazon Affiliate link.