A strategy game for two designed to play in 10 minutes. Or that’s the big proposition anyway. “A quick strategy game for cunning minds,” reads the back of the box. That’s exciting as it’s an underfilled niche for modern games. It’s a space mostly occupied by the abstract hit, HIVE. I’ve only had a couple of games of HIVE but the puzzle of it was so moreish that one game turned into a best of five. Each type of piece in HIVE, denoted by different insects, offers a unique ability seducing you to try out new strategies. It doesn’t take up much space on the table, but the strategy demands a lot of space in your mind.

So how does Thronestorm compare? Well, the first thing you’ll notice is Thronestorm gives a lot of space to its theme, at least visually. The 40 cards in the game each depict a piece of adventuring equipment. The game looks gorgeous out on the table as you’re rewarded with a big colourful tableau of item cards that grows as the game progresses. There are ten different coloured sets with a complete set featuring, a hat, a shield, a weapon and a trinket. Each set feels distinct and they’ve done a good job of creating clearly different sets of equipment. You’ve got a set that seems to belong to the Pope, a pirate’s kit, a set of items inspired by Skyrim, basically all the fantasy classes are covered. While the different sets are largely distinct, the type of item on the card isn’t always clear as in play there were several confusions between certain hats that look like shields and vice versa.

To win Thronestorm you have to collect a full set of equipment into the four slots of your inventory. So rather than being a strategy game about warring armies or political manoeuvres, the theme, I think, is meant to represent two heroes racing to put on a coherent outfit. In my head, I imagine the cards on the table to be clothes and items chucked on the floor as the two heroes rummage through the wardrobes represented by the decks of cards. Nothing in the game indicates this is the case but it’s about as much theme as you’ll get out of the game.

Playing the game consists of taking a card from one of the piles to add to your inventory, discarding a card if you have two of the same type (wearing two hats would be ridiculous) or using a card in your inventory to interact and move around the cards on the table allowing you to exchange them with your inventory.

The core loop of Thronestorm is pretty simple as there are only two actions to choose from. However, the game doesn’t really emerge until about eight turns in. It’s best to start off by filling each slot in your inventory as this will enable you to interact more with the realm (the cards in the centre of the table). Cards only enter the realm when they’re added by players discarding them from their inventory. After your first four turns and you’ve filled your inventory there still won’t be enough cards in the realm to interact with it. So you keep drawing cards, steadily working towards a set and dumping items into the realm. Playing for the first time it’s not obvious that you should grab any card to fill each slot in your inventory so you end up stretching out the early phase of the game where nothing can really happen. 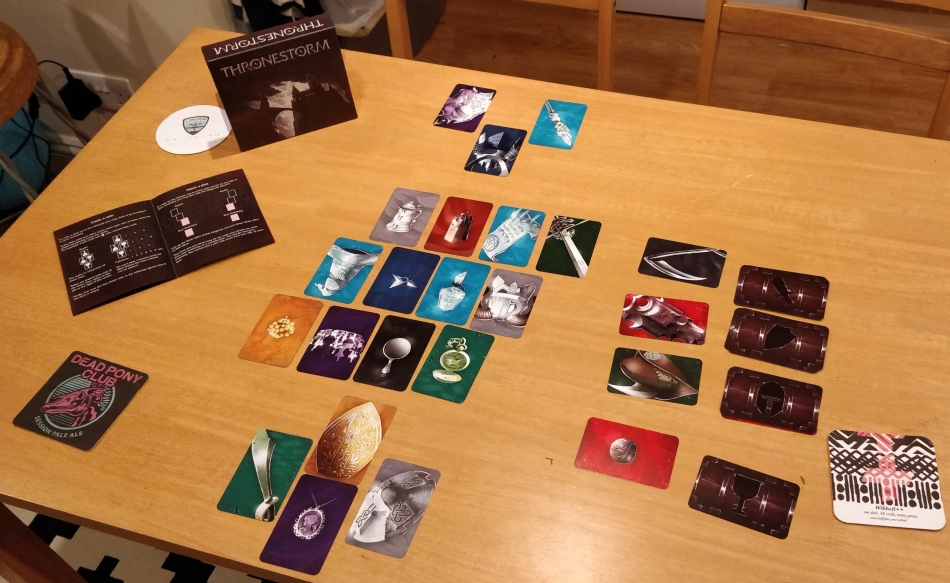 That’s the main problem with Thronestorm, the game regularly falls into a state where you can’t really do anything meaningful to improve your chances of winning. You collect 3 of a set and you need a 4th card to win. Your opponent has done the same. The cards needed are still in the decks so interacting with the realm becomes irrelevant. The game simply becomes taking it in turns to take cards hoping the luck of the draw is in your favour.

At best the game becomes most interesting if the realm fills up and you need to start jostling the cards around to complete your set. This is the closest Thronestorm gets to feeling like an engaging game. Moving the cards around in the tableau via the plot action feels interesting. The closer you get to completing a set the less you’re able to interact with the realm. It has beginnings of a decent abstract game and there’s almost something connect four about it as much as that can be a compliment. Keeping an eye on the cards your opponent has and making sure to keep the realm arranged in a way that blocks them from getting the cards they need. If the game was just this it wouldn’t be too bad, but sheer randomness of the way the cards come into play removes a lot of the meaning from choices you can make. There’s no real strategy to it as you can’t plan ahead. Each turn there’s some tactical thinking but planning ahead won’t yield particularly satisfying results.

I really wanted to like Thronestorm, it’s small, it’s vibrant and it promises a quick strategy game for two players. There are brief flashes of a decent game here and there. I wonder if you changed to set up to place all the cards into the realm and give each player a random inventory. It would negate the problems that the draw decks represent and emphasise Thronestorm‘s more interesting mechanic. It would almost function as a competitive match three game, players rearranging the cards to collect the ones they need while blocking their opponent.

Sadly, I can’t really recommend Thronestorm to anyone. Trying the game with new people often resulted in “oh, was that it?” when the game ended. A 2 player strategy game, no matter how long, should be an exciting battle of wits and far from being an exciting duel, Thronestorm throws away its shot.